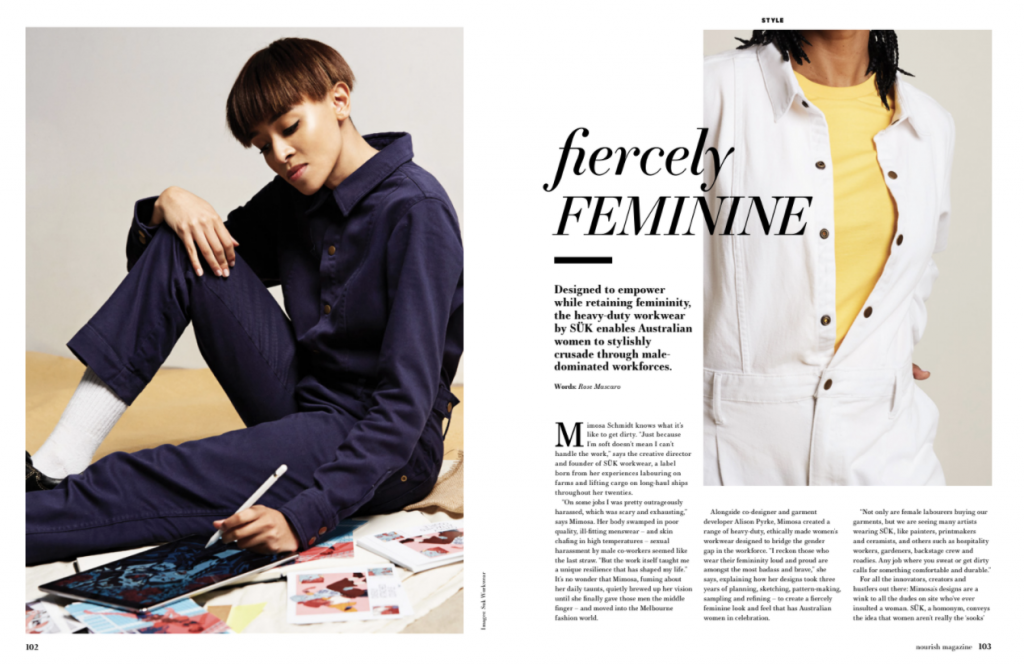 Designed to empower while retaining femininity, the heavy-duty workwear by SÜK enables Australian women to stylishly crusade through male-dominated workforces.

Mimosa Schmidt knows what it’s like to get dirty. “Just because I’m soft doesn’t mean I can’t handle the work,” says the creative director and founder of SÜK workwear, a label born from her experiences labouring on farms and lifting cargo on long-haul ships throughout her twenties.

“On some jobs I was pretty outrageously harassed, which was scary and exhausting,” says Mimosa. Her body swamped in poor quality, ill-fitting menswear – and skin chafing in high temperatures – sexual harassment by male co-workers seemed like the last straw. “But the work itself taught me a unique resilience that has shaped my life.” It’s no wonder that Mimosa, fuming about her daily taunts, quietly brewed up her vision until she finally gave those men the middle finger – and moved into the Melbourne fashion world.

Alongside co-designer and garment developer Alison Pyrke, Mimosa created a range of heavy-duty, ethically made women’s workwear designed to bridge the gender gap in the workforce. “I reckon those who wear their femininity loud and proud are amongst the most badass and brave,” she says, explaining how her designs took three years of planning, sketching, pattern-making, sampling and refining – to create a fiercely feminine look and feel that has Australian women in celebration.

“Not only are female labourers buying our garments, but we are seeing many artists wearing SÜK, like painters, printmakers and ceramists, and others such as hospitality workers, gardeners, backstage crew and roadies. Any job where you sweat or get dirty calls for something comfortable and durable.”

For all the innovators, creators and hustlers out there: Mimosa’s designs are a wink to all the dudes on site who’ve ever insulted a woman. SÜK, a homonym, conveys the idea that women aren’t really the ‘sooks’ after all. “Expressing emotion or sticking up for yourself is brave. Admitting you don’t know how to do something, that you were wrong, or that you are in pain or struggling – these things may be seen as ‘sooky’ – but they are also integral to learning and progressing. Sure, I didn’t have the brute strength of some of the men on site, but I had focus and endurance,” she says.

“I cannot believe the blatant harassment that I endured on some jobs. Working on ships was another matter entirely – many people, nearly always men, told me it was outright stupid and far too dangerous for a young woman. One guy even rang my mother and told her not to let me go! But I was extremely excited about the idea of being at sea and being in an intense working environment, learning a new complicated role. The excitement outweighed the fear.”

“To be honest, these days I know my worth and power, so slights against my femininity are water off a duck’s arse. But when I was younger, I didn’t understand my value. As a woman, I can now see how a lot of the men I was working with actually craved femininity – they missed their wives and mothers, sisters and daughters,” Mimosa says. It was the first time she realised the value of feminine energy: how it was coveted and craved, helping her to rewrite what it meant to be feminine.

“I like to think that slowly we are seeing a change in gender equality, and I feel the existence of SÜK is a proud signifier of that,” she says of her comfortable, durable designs. “What you can’t see is how complex the fit is: having the waist sit firmly so there is less chafing between the thighs, opening the bust, and tapering it down through the bodice. It’s all about housing the body and creating space for curve,” she says proudly.

And that’s precisely why her designs are being snapped up by Australian audiences and attracting interest internationally. “The Relaxed Work Pants are going off,” Mimosa says. “The feedback is that they are just really comfortable! We’ve had many customers come back and buy them in every colour. I guess they have that formal edge, with a fitted waist and pleats that give them a sophisticated look, while also being durable, comfortable and understated. I wear mine every day, so I know what they’re talking about. I don’t feel like we’ve reinvented the wheel; just oiled it up and made it sing.”

A cruelty-free, sustainable and environmentally conscious company, Mimosa’s belief is that ethical practices must be the underpinning value in any company today. “There is so much waste in the world,” she says. “It’s imperative that we all take on the initiative to think cleaner – not just business owners, but consumers too. Where you shop and spend your money has a huge effect. The onus is on all of us.”

Based in Collingwood, Melbourne, The Social Studio is created from the style and skills of young migrants and refugees. With $1 donated from each SÜK garment sold, the partnership aids diversity, community, education and employment of young people. “The Social Studio is a long-standing boss organisation that’s doing some exciting and important work,” Mimosa says. “I feel humbled and proud that they were keen to create a partnership with us. This relationship tells me that SÜK is on the right track. Our donations are simply to help them keep doing what they do best.”

But, despite crusading for change amid the glitz of the fashion world, Mimosa still thinks fondly of her previous career. “To be honest, I still miss it,” she says. “Discovering I could keep up with the others on site, mostly men, and more often than not, out-perform them, is an incredibly empowering feeling. To women or feminine-identifying people out there that think physical labour roles might be good for them: if you want it, nothing is stopping you. Go get it.”

SÜK Workwear ranges from $90 to $190 in sizes 6 to 24, including long and short body options. You can find SÜK instore at Keoma, Fitzroy in Melbourne or online at http://www.sukworkwear.com.

Listen to the Podcast