Friends of the forest 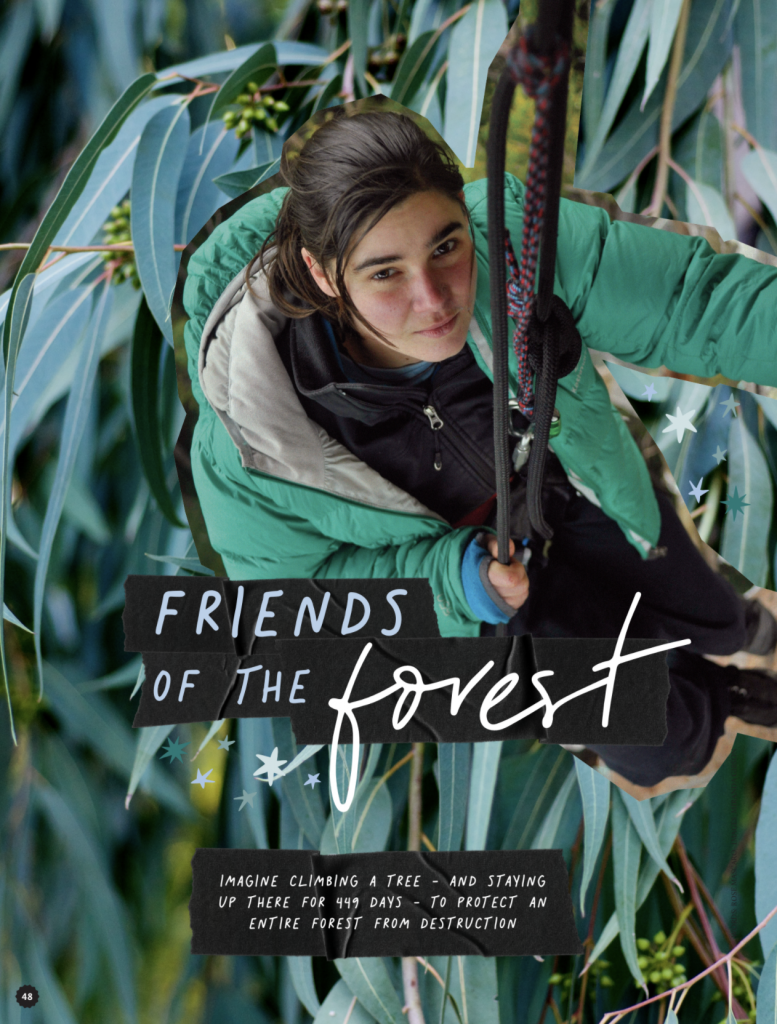 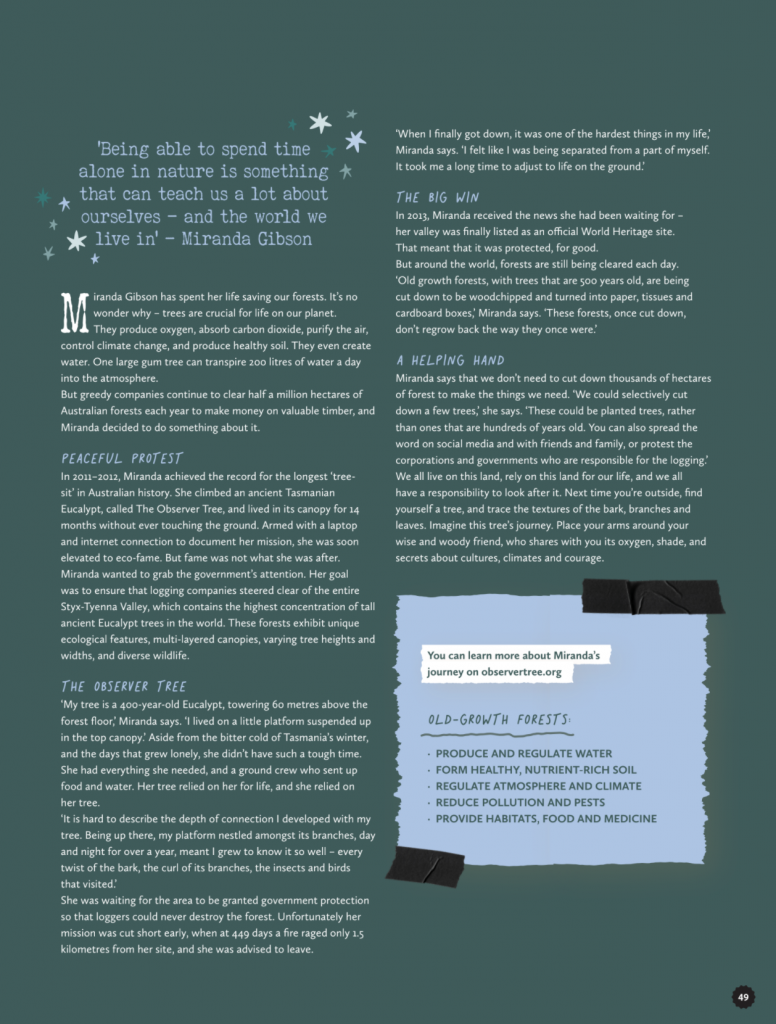 Imagine climbing up a tree – and staying up there for 449 days – to protect an entire forest from destruction.

Miranda Gibson has spent her life saving our forests. It’s no wonder why – trees are crucial for life on our planet. They produce oxygen, absorb carbon dioxide, purify the air, control climate change, and produce healthy soil. They even create water. One large gum tree can transpire 200 litres of water a day into the atmosphere.

But greedy companies continue to clear half a million hectares of Australian forests each year to make money on valuable timber, and Miranda decided to do something about it.

In 2011–2012, Miranda achieved the record for the longest ‘tree-sit’ in Australian history. She climbed an ancient Tasmanian Eucalypt, called The Observer Tree, and lived in its canopy for 14 months without ever touching the ground. Armed with a laptop and internet connection to document her mission, she was soon elevated to eco-fame. But fame was not what she was after. Miranda wanted to grab the government’s attention. Her goal was to ensure that logging companies steered clear of the entire Styx-Tyenna Valley, which contains the highest concentration of tall ancient Eucalypt trees in the world. These forests exhibit unique ecological features, multi-layered canopies, varying tree heights and widths, and diverse wildlife.

‘My tree is a 400-year-old Eucalypt, towering 60 metres above the forest floor,’ Miranda says. ‘I lived on a little platform suspended up in the top canopy.’ Aside from the bitter cold of Tasmania’s winter, and the days that grew lonely, she didn’t have such a tough time. She had everything she needed, and a ground crew who sent up food and water. Her tree relied on her for life, and she relied on her tree.

‘It is hard to describe the depth of connection I developed with my tree. Being up there, my platform nestled amongst its branches, day and night for over a year, meant I grew to know it so well – every twist of the bark, the curl of its branches, the insects and birds that visited.’

She was waiting for the area to be granted government protection so that loggers could never destroy the forest. Unfortunately her mission was cut short early, when at 449 days a fire raged only 1.5 kilometres from her site, and she was advised to leave.

‘When I finally got down, it was one of the hardest things in my life,’ Miranda says. ‘I felt like I was being separated from a part of myself. It took me a long time to adjust to life on the ground.’

In 2013, Miranda received the news she had been waiting for – her valley was finally listed as an official World Heritage site. That meant that it was protected, for good.

But around the world, forests are still being cleared each day. ‘Old growth forests, with trees that are 500 years old, are being cut down to be woodchipped and turned into paper, tissues and cardboard boxes,’ Miranda says. ‘These forests, once cut down, don’t regrow back the way they once were.’

Miranda says that we don’t need to cut down thousands of hectares of forest to make the things we need. ‘We could selectively cut down a few trees,’ she says. ‘These could be planted trees, rather than ones that are hundreds of years old. You can also spread the word on social media and with friends and family, or protest the corporations and governments who are responsible for the logging.’ We all live on this land, rely on this land for our life, and we all have a responsibility to look after it.

Next time you’re outside, find yourself a tree, and trace the textures of the bark, branches and leaves. Imagine this tree’s journey. Place your arms around your wise and woody friend, who shares with you its oxygen, shade, and secrets about cultures, climates and courage.

You can learn more about Miranda’s journey on observertree.org

Listen to the Podcast